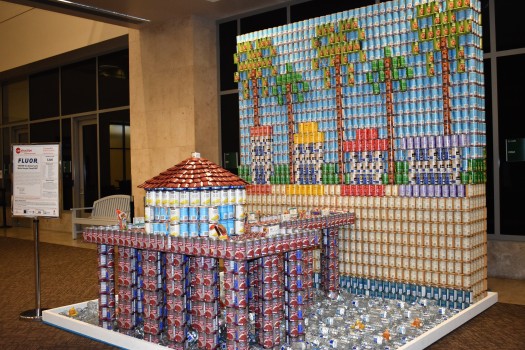 TCA Architects, who won the “Best Meal” Award, built their “You CAN Catch a Poke-Bowl” Canstruction using vegetables, rice, tuna and clams, and incorporated the iconic and popular Pokemon into their structure. The clever structure is on display through September in the Arrival (lower) Level near Terminal B baggage claim.

Fluor, which has sponsored Canstruction since its inception 11 years ago, built a representation of our scenic Orange County beach towns using 5,025 cans of food. The “WATER You Doing? Let’s Make Hunger DisapPIER” Canstruction won the “Best Use of Labels” Award, and features colorful homes, palm trees, pier and lively beach scene. You can view this intricate structure in the Arrival (lower) Level in Terminal C near baggage claim.

There were eight teams this year and they each had just twelve hours to complete their structures. At the end of the competition all of the food used will be donated to the OC Food Bank. “Canstruction OC is a lighthearted and engaging way to bring awareness to the serious subject of hunger in our community,” said Barry Rondinella, Airport Director for John Wayne Airport. “We are proud to participate in this worthwhile program.”

The two structures will be on display through the end of September.